I voted for Richard Nixon in 1972. I distinctly ewmwmber having my absentee ballot and negating a co-classmates vote for McGovern. I was stupid and beliebed in the honesty of ur government and media. I have learned didfferently. How may ofus will die becaue we have a oron, an incompetent, a special ed child as pres, just because you fell for the name. And the name was tarnished in the first place. I know kids who have the mental ability to think better than dubya. You know it and it scares you. He runs the most important country in the world. He cannot think for himself, he drank himself braindead a decade ago. We need a learder. Hell I could run the country better than him. ans so can most people on this forum.

Thanks for the vote of confidence in my ability to run the best country on the face of the earth. If I was chosen to lead this country, I would listen to those who might dissent with me and I would try to treat with respect all those whose concerns over the leadership of this country seems to focus on whether you get your dicked sucked while in the Oval Office.

I would even listen with respect to those who think that having your dick sucked while in the oval office is a moral degradation to the country and our society but that raping the country in the name of greed and self gain is the American Dream personified.

Of course, after respectfully listening to those people, I might have to tell them "Too bad, you voted for a loser, so you're fucked."

BTW, if my remarks bear any resemblemnce to any member of this forum it is purely coincedental, and as long as you show proper and unconditional groveling to me personnaly, I will suffer to let you defend me, even when I make the most incredible mistakes that you can imagine.

Thank you, my subjects.

McGovern! Whatever happened to that weenie? Is he still alive? Does he teach Poly Sci at U. South Dakota? Is he drooling at a Retirement Home for has-beens?

I think the original post attributed to Cherri is the work of a troll.

I think Jack Booted Thug is suffering from delusions again. JBT, are the Xians trying to steal your wallet again?

Pibb, I agree. The misspellings too contrived.

Did you noice in the "DUMBYA and Illuminati" thread that putzhead thinks we are the same person? The poor sap.

He probably also thought that Pat Buchanan was Al Gore.

The people who picked Pat Buchanan because they thought they were picking Al Gore probably weren't paying attention as much as they should have, though the way the ballot was designed was admittedly a bit misleading.

The REALLY dumb people were the ones who picked George W. Bush when they KNEW FOR SURE they were actually picking George W. Bush!!

The only people who seemed to be confused about the Florida ballots were a bunch of blacks and various immigrants of questionable intelligence and legal residence status. I did see some elderly whites in the crowd of protestors but they were but a few and most likely given some cigs and a couple bottles of Mogen David to show up. If these are the people that would elect our President then there really is no hope for this country.

Trollboy is a Buchanonite because he is into all the konspiracy shit and because the lefties wouldn't have him.

"The only people who seemed to be confused about the Florida ballots were a bunch of blacks and various immigrants of questionable intelligence and legal residence status."

Hey look, I can understand that Brutha Roland's intelligence is highly questionable, since he voted for Dumbya, but you really shouldn't make such generalized statements about ALL blacks.

If Roland cast his vote for GWB, his above average intelligence is beyond question. In your case, the jury is still out. “Send’ made NO generalized statement about ALL blacks as far as I can tell, only the ones involved down in Florida. Here’s how it works:

I know this may be outside of your abilities so please do not strain yourself.

LOL, oh I see! Now they have a different "breed" of blacks "down in Florida".

Roland, I should have added ‘confirm’, which this mental moron has done so well.

George McGovern lives. He is available for speaking engagements. Cheap!

Don't know about Roland, but if I was a nigga I'd be offended by Send's remark about blacks having questionable intelligence. Sounds like something Dumbya would say; automatically assuming that whites are more intelligent, while he is living proof that this isn't true.

"Send" respects peoples who do for demselves. Dat be da opposite of racism.

Sheeeyut, yous jus a honkie ass-kissin nigga, lettin whitey call you a dumb ass and you still be suckin up to him like a slave boy. Sheeet bro, you ain't jivin nobody but yoself, fool.

Maybe folks that can't figure out a ballot should be allowed to give their proxy. Shouldn't cost much more than it did to get them registered in the first place. Six-pak maybe, a carton of ciggs on the outside. 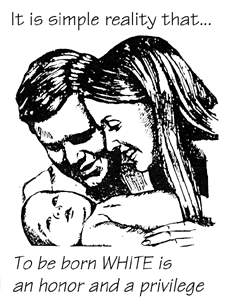 Paid for by the GOP

Hey Cherri, how does it feel to be the Gary North of political debate?

Often, the presidential candidates of both parties are hacks. But twice in the last 50 years there have been candidates of character, principle, intelligence and compassion. I refer to Adlai Stevenson in '52 and '56 and George McGovern in '72. Both were rejected soundly by the voters.

We get the governments we deserve.

Edwina, the voters in their wisdom usually know a weakest link when they see one. Not always, but usually. If Carter had lost in 76, you would include him with those other wimps, Stevenson and McGovern.

But it worked out for the best. If Carter had not defeated Ford in 76, we would not have attained Reagan in 80.

"But it worked out for the best. If Carter had not defeated Ford in 76, we would not have attained Reagan in 80."

Oh yeah, the Reagan years, those were great times.

Why yes, those were great times, unless you were an unemployable burger flipper. Guess you were part of the ‘why me' generation. If you can’t hack it in a free enterprise society, shuffle on down to Cuba weak-knees or stay on the porch.

The executives of corporations like Enron and Tyco learned how to do their scams with Reagan's encouragement and support. If you call that "free enterprise" I call you a stupid blind sucker who swallows the bait, hook, line, and sinker. You probably bought the "trickle-down" theory too, lol!

For someone that couldn’t hold down the night shift gig at Circle K, you sure know a lot about the inner workings of the corporate jungle. Who tagged you with the name ‘real dimwit’?

Why did you start using the name "send mo money" Socrappy? Running a little short on cash since the gubmint cut back on hiring retards?

I guess you haven't seen Socrates home in Newport or his boat.

Newport?? Bwaahahahaa! That's an overpriced yuppie-scum and tourist-trash-infiltrated cesspool. Whoop-dee-doo, he's got a BOAT! Oh boy, a status symbol for those who can't have real wealth. I'll bet he can't afford to take it out more than a couple times a year, lol.

Socrappy hasn't seen my mansion on my sprawling mountain forest estate in the pristeen wilderness either. He can't achieve REAL wealth, it's not in his low-class genes. He was bred to be a poser, a rich-man wanabee!

This is all very interesting. Anybody care to explain what ‘socrappy’ is.

You really should stop fantasizing about me. I know it's difficult, but it's time for you to move on.

Unk I seem to remember you deleting posts by someone who used your name, yet you allow this filth about cin to stay up, and don't take steps to prevent it? You obviously can see this poster's IP and know who it is. Is this someone who emailed you for the password to your "troll free" forum? I also remember that you refused to delete some horrible things about Sumer's family. What a joke and a double standard. How can you live with yourself.

I'm sorry Unk, I didn't mean that. I couldn't help venting my frustration with my own pitiful existence and pathetic excuse for a life. You are an honorable man, it is me that can't live with myself.

You are a sick and evil person, and I wish I could be there to see your face on judgement day.

You really shouldn't keep putting yourself down like that, it's not good for your self-esteem.

JBT since you butt in AGAIN, perhaps you will feel differently when they are discussing YOUR daughter.

Who's discussing who's daughter?

I was referring to the people who were discussing YOUR children.