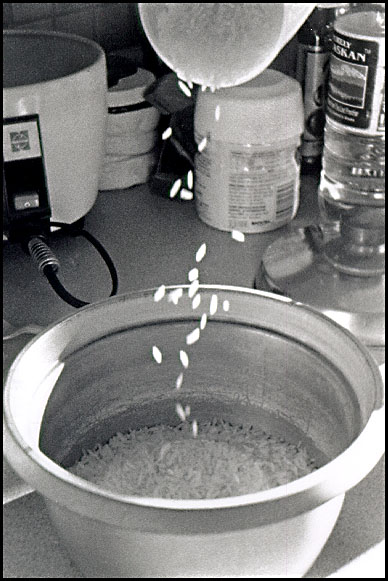 This picture captured the rice grains falling into a rice cooker, frozen in time, yet conveys a sense of movement.

From the reflections of the bottles at the background, it seems that there was an on camera flash.

Mimi was making dinner and pouring the rice into the cooker. I noticed the sunlight hitting the rice as she poured it (no flash on this shot!) so I had her re-pour but very slowly so I could catch some of the single grains.

What's absolutely amazing about photography with the Minox is that you can take pictures of ANYTHING and not worry about any issues of illegitimacy arising from people with their noses in the air. Some large format or medium format photographer will typically say to me that my Minox shots are stupid, that I shouldn't have bothered taking them, that they have no pictorial qualitites, that the grain is excessive, and why bother? I say, "Who cares? It's a Minox snap! It is the most unpresumptuous camera on the planet.

Martin, would you prefer that ALL photos be posted to this one thread, or that new threads be posted for each image? And how many would you suppose can be posted for a given period of time? (don't worry, I'm not going to FLOOD the forum with my snaps!! :)

Tony, it is a surprize that there is no flash in the picture, that makes the frozen rice even more interesting !

I like the one picture one thread format of photo.net, and there is no restriction or limit to how many pictures can be post, the more the better.